A sample is (automatically) introduced into the density gradient solution, and the particle size is calculated from the settling time required to reach the detector. This mode enables you to measure a very small quantity of high concentration sample with high resolution.

Settling starts from a uniformly distributed sample and the particle size distribution is calculated based on the information of particles passing through the detection zone. This mode is suited for measurement of low concentration samples.

The Partica CENTRIFUGE continuously measures particle size from the start of acceleration until the maximum speed is maintained. This gradient acceleration allows a wide range of particle size distributions from small to large particles to be obtained without setting the rotation speed in a single measurement. Therefore, it enables the detection of even the small number of large particles and aggregation. 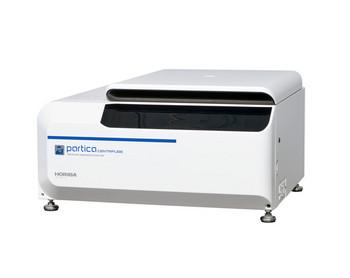